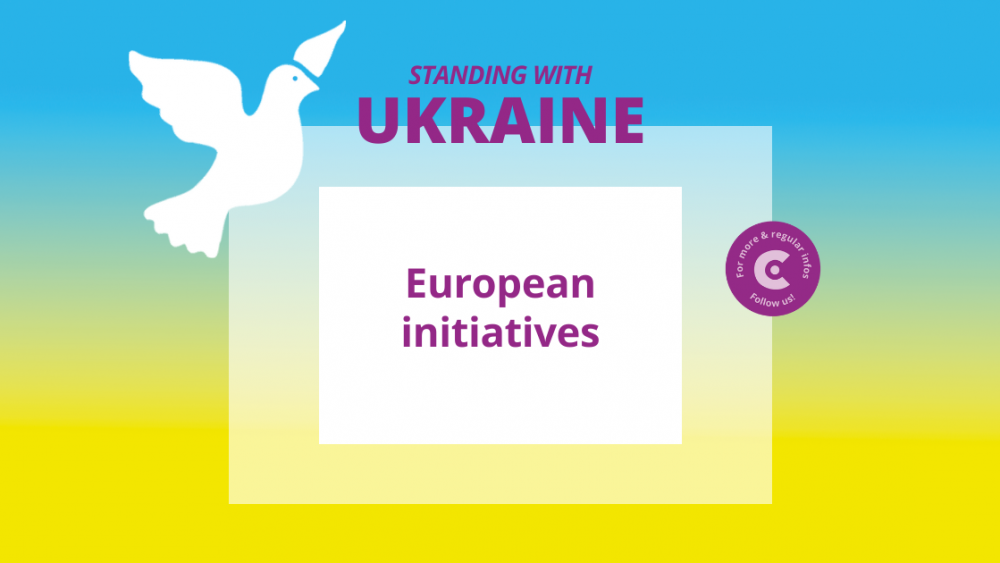 Many European cultural institutions have been voicing their support and expressing their solidarity for Ukraine. With the following list, we are starting our series on sharing information regarding help and support initiatives for Ukraine. The listed initiatives below entail actions taken on a European level with a particular focus on supporting the cultural and creative sector. In the upcoming weeks, we will extend this list with initiatives happening on regional and national levels.

“As leaders of the Council of Europe we expressed on several occasions our firm condemnation of the Russian Federation’s aggression against Ukraine. This unjustified and unprovoked aggression led to the decision of the Committee of Ministers and the Parliamentary Assembly to initiate the procedure of expulsion of the Russian Federation from the Council of Europe provided under Article 8 of the Statute.”

Two weeks ago, the Council of Europe launched another powerful support option to strengthen the communication and connection between European and Ukrainian cities. The “Cities 4 Cities” platform is an online exchange tool allowing interested authorities to share their needs, offers, and resources within a few clicks with others.

Regarding the preservation of art and culture, the Council of Europe raised awareness of the recent killings of journalists and media professionals in Ukraine at its “safety of journalism platform.” This website offers professionals as supporters a platform for information, memorials, help guides, and contact points.

Similarly, the Council of the European Union expressed its solidarity and support with Ukraine. During a conference with the European Ministers responsible for Culture, Audiovisual, and Media, the Council declared its unwavering support for Ukraine, also highlighting the need for art and culture in times of war. Accordingly, art and culture represent important means to promote peace, dialogue, respect, tolerance, and mutual understanding.

On the one hand, this support materializes itself in assisting international organisations and relevant partners in the preservation of Ukrainian museums, monuments, and urban heritage. On the other hand, the ministers agreed preserving existing culture does not cover all facets of the issue. It is as much about preserving art and culture that already exist, as those that are about to be created. Therefore, the Council calls for the support of artists, journalists, culture and media professionals, who – next to their life – also have to fear for their freedom of expression and artistic creation.

Other European associations confirmed this position. The European Cultural Foundation re-orientated its European Culture of Solidarity project calling everyone to stand together and resist Putin’s attempt to rewrite European borders and history. This project aims to enhance the unity and solidarity amongst European citizens and beyond.

Today there is no more urgent place to realise our European culture of solidarity than in Ukraine…Putin’s attack on Ukraine puts our values to the test. We must support our friends, colleagues and everyone currently suffering in Ukraine and share the burden of our solidarity among us Europeans. We really are in this together!

Within this context, the ECF launched the “Culture Solidarity Fond – Ukraine special Edition.” The fond invites institutions as individuals alike to choose between different causes for their donation. The donations can support independent and trusted media sources to prevent disinformation, fake news, and propaganda. Further, they can help establish and nourish safe spaces for fleeing individuals – as well as – provide people with artistic and cultural space to express themselves freely in times of war.

Other European institutions called for transforming international relations and the exchange of information. The Culture Action Europe stressed the creation of international cultural cooperation between the EU and Ukraine to help preserve the country’s monuments and freedom of (artistic) expression. ICOM and UNESCO both highlighted the need to exchange information, knowledge, and experiences regarding cultural crisis management.

This list is by no means complete. We call on everyone to share information regarding support initiatives, statements, funds, petitions, photos, etc. with us. You can send information to the following mail address: hoerter@kupoge.de.