During the last two decades, Armenia has survived significant changes in the cultural policy situation. The Soviet Union collapse resulted in the destruction of a centralised, ideologised and state-financed system of cultural development and cultural policies. 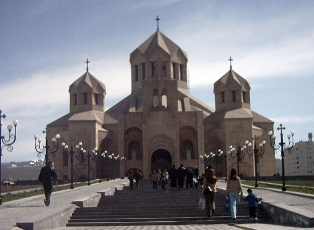 From the first days of its existence as an independent state, the Republic of Armenia had to develop and adopt new policies and mechanisms of cultural management as the old ones did not work under new conditions. The old Soviet system of cultural management and cultural policies were extremely politicised and ideologised as culture was considered as a tool for ideology and propaganda. Therefore, culture was controlled from the top. It can be characterised as a “paternalistic” model according to Abraham Mole’s definition. One of the realities of the Soviet period was various “unions” of professionals in the spheres of art, literature, music, etc, controlled by authorities and responsive to them. Most of the unions have been preserved and display a very weak level of adaptability to the new market economy and cultural development trends. Their current existence is explained by difficulties in the understanding the transition to new forms of marketing the arts. “Unions” of that kind also keep alive the mechanism of centralised distribution of state money aimed at supporting culture and cultural events.

One of the most remarkable tools of cultural policy of the Soviet period was popularisation of cultural activities and accessibility of cultural events to large layers of the population. Thousands of art and music schools were created throughout the country. Theatres, music halls, libraries and exhibitions existed in every small town and were financially available to even low-paid employees. Secondary, professional and higher education was free of charge. The specialised music and art education was also freely accessible. The comprehension of culture as the most effective method of influencing and governing the masses was inherited by the authorities of independent Armenia. At the same time, a significant shift in values, ideological categories, goals and objectives of national development as well as adoption of the principles of the new market economy and democracy made them seek how to unite previous and current approaches to cultural management and policy development. The current model of cultural policy and management includes both approaches and seems to oscillate between them. However, in the last decade cultural policy has become more structured, more defined and overwhelming. It tries to combine centralised methods of supporting culture with encouragement of public and private mechanisms of development of particular spheres of culture, public regulation of cultural demands and offers, and attraction of private investment into the cultural sphere, etc.

In Armenia cultural policy was mainly directed to the preservation and presentation of material cultural heritage. and spreading of the national traditional system of values; at the development of citizens in the newly independent state and the cultural environment; at the enhancement of the social-psychological atmosphere of society; and is also aimed at ensuring the national security of the state. The main goal of the state in this field is to ensure the rights of its citizens to carry out cultural activities, to enjoy cultural services and cultural fruits, to ensure their availability, as well as the recreation and development of the cultural potential of the society. Today, cultural policy in Armenia is being adjusted to consider new economic relations; a culture management model, a balance of market mechanisms and state guarantees is being formed. However, cultural policy still remains fairly centralised even though in 1995, after the adoption of the Constitution, the process of decentralisation in the cultural field was started (see chapter 1.3.1 for more details).

During the first decades of independence, the state cultural policy of RA was mainly aimed at the physical preservation and presentation of the tangible cultural heritage, which was considered a priority. The legislative field has been more or less regulated and fixed (based on the Law on the Basis of Cultural Legislation, the Law on the Immovable Historical and Cultural Monuments and the Protection and Use of Historical Environment, the Law on Archives, and the Law on Export and Import of Cultural Property). There has since been a cultural policy shifts toward the intangible cultural heritage, its protection, development and promotion, which has become one of the most important areas of the cultural politics of Armenia.

As a result of decentralisation, 1 586 cultural organisations (cultural houses, libraries, music and art schools, and theatre and concert organisations) have fallen under the jurisdiction of local-self-government bodies. To fill a number of gaps in the decentralisation policy, such as incomplete legislative field, poor management system, lack of internal policies (the laws that defined them – the Laws on Cultural Legislation and Law on Local Self-Government – were adopted in 2002), the Ministry of Culture implemented a number of programmes providing state assistance to the Marzes and communities and conducted a number of activities that were aimed at, by continuing the decentralisation policy, ensuring the necessary legislative framework and at providing organisational assistance. The Government Programme on Culture Development in the Marzes aimed to provide solutions for the main concerns (improvement of the management system, the availability of cultural services, the possibility to carry out cultural activities, the ability to receive a cultural education etc.). Today’s main issue is to help the local self-government authorities to implement their plans in the cultural field, bearing in mind the importance of direct participation of communities in the organisation process of cultural life. Major changes in the cultural policy of the Marzes are not envisaged.

According to the report of the Ministry of Culture of RA the legal sector of cultural sphere is regulated on an annual basis. The cultural policy of RA is based on the principle of continuous improvement of the legal framework.

The Law on the Principles of Cultural Legislation, adopted in 2002, defines the main principles of the state cultural policy:

According to the Law on the Principles of Cultural Legislation, the main objectives of the state cultural policy are:

At present, the cultural policy of the Republic of Armenia is guided by the following principles: