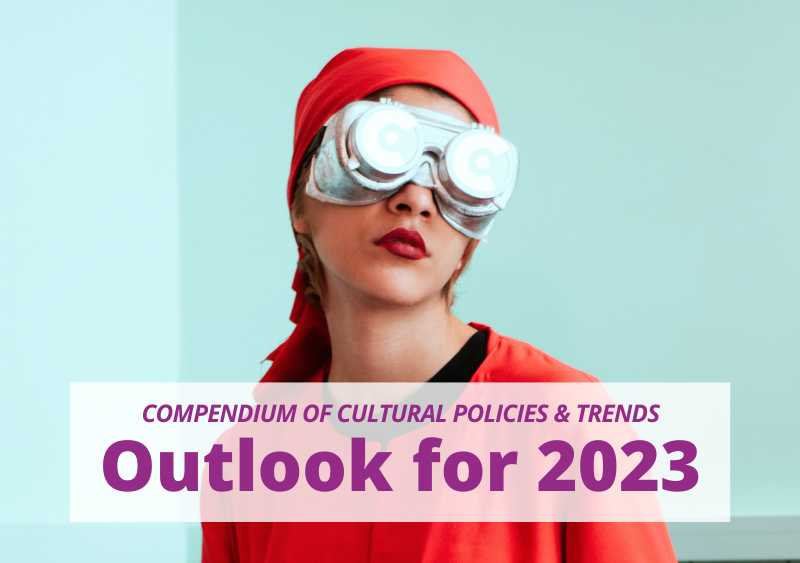 The Comendium has a lot planned for this year to promote its community and strengthen its role as a monitoring platform for European cultural policy. In order to be transparent and give others the opportunity to participate in the processes, we would like to give an outlook on the year 2023.

To research and monitor.

As an information exchange and monitoring portal, the Compendium often sees the difficulty of scientific research and processes not being able to adapt immediately to our fast and ever-changing world. But at a time when one crisis follows another and human rights are being curtailed all over the world, it is crucial to raise awareness of different perspectives, values and approaches – and to be able to do so instantly.

When the COVID 19 crisis erupted, the Compendium initiated the first research campaign to identify the impact on the European cultural sector and its policies. The aim was to quickly share and compare experiences in order to speed up adaptation processes in case of further pandemic waves. After the WHO announced the end of the COVID-19 pandemic this year, the board of the Compendium Association described freedom of artistic expression as a fundamental element of cultural policy for the preservation of a democratic, healthy and free society.

Based on the current Russian invasion of Ukraine, the Compendium sees an increase in populist and anti-democratic tendencies in observed European cultural policies. Inevitably, the question arose to what extent cultural policy still values and upholds the freedom of artistic expression. This question led to the focus of this year’s cultural policy research campaign “Silencing Dissent? – On Barriers to Freedom of Artistic Expression“. The campaign invites the sector to take a critical look at the status quo of today’s freedom of artistic expression and to have an open exchange about the barriers that limit the creative diversity of artists.

This initiative sends a warning signal regarding our European and democratic values of free (artistic) expression, cultural diversity and freedom of development. This signal is important in times of societal pressures “that force people into certain worldviews, belief systems and cultural practices [that] pose a threat to human rights and cultural rights in particular” (Bennoune, 2018). The coordinating team asked Andreas Joh. Wiesand, co-editor of the 2016 handbook “Culture and Human Rights – The Wroclaw Commentaries,” to write an introduction to this task.  In order to open a debate and not just inform, the Compendium will invite the general public to participate in various interactive formats (e.g. webtalks, online surveys, interview screenings) in addition to publishing new reports on the topic.

To grow and bloom.

Our ongoing goal is to grow as a community, a network, and a knowledge platform. We can only achieve this by expanding our community of experts and members, by offering more opportunities for co-creation and exchange.

For 2023, we would like to expand our research relationships with European countries such as Moldova and Bosnia-Herzegovina and will be launching a call for cultural policy experts in the coming months. In general, we would like to expand our field to countries beyond European borders, such as Canada and the United States. In this context, we would also like to point out the benefits of membership. Our members have special rights as they participate in shaping the future path of the Compendium, they are involved in the annual meeting of the Compendium and, in addition, we specifically promote cultural policy developments in their respective countries in our new format “News of the Members”.

Join us to grow and bloom.

To connect and exchange.

It is with great anticipation that we announce today that Arts Council Malta will host the next International Cultural Policy Conference 2023 in Malta. Together, we invite the cultural policy community to engage in the central debate on “Right to Culture” on October 5. This will be followed on October 6 by the 6th Assembly of the Compendium Association as a meeting point for the Compendium community itself.

After the success of the last conference in Bucharest, we look forward to more fruitful discussions and exchanges – this time with a stronger focus on interactive formats. More information will follow soon!

Curious about our past conferences? Under the following link you will find a detailed documentation of the last conference with a general outlook on cultural crisis management, as well as, keynotes and video material: https://www.culturalpolicies.net/bucharest-conference-outcome/