The Apostolica Sedes, or Holy See, considers itself a promoter and guardian of art and culture. From its beginning and even in times of persecution, works of art were used to adorn places of worship. Religious freedom in the fourth century led to the birth of a characteristically Christian art, which found its expression in 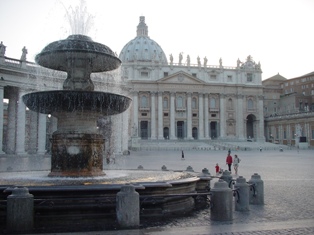 religious buildings and their decoration.

In the Middle Ages, the Church, especially in Rome, became the guardian and vehicle to promote ancient cultural heritage. Old works were copied and the arts were taught in monasteries. Universities, typically European creations, were set up within the Church structure.

Following the period of Enlightenment, a rift developed between the Church and culture.

With the Second Vatican Council in the 1960s, the Church shifted its focus from a classical, humanist concept of culture to one that focused on its anthropological dimension. The Pastoral Constitution on the Church in the Modern World (Gaudium et spes) devoted a chapter to the Church’s relationship with culture and cultures.

Since 1965, the Holy See has been very aware of the importance for the Church of dialogue with contemporary culture and of its relationship with different cultures. In the Vatican Museums, Paul VI created a collection of contemporary art and in his exhortation Evangelii nuntiandi (1975), he drew attention to the need to evangelise culture. This awareness, together with a rich personal experience, led Pope John Paul II to create the Pontifical Council for Culture in 1982, with the aim of providing the Holy See with an instrument capable of fostering the Church’s dialogue with people and institutions from the world of culture and cultural policy.

In the field of culture, Pope Benedict XVI has maintained continuity with the policy of his predecessor, Pope John Paul II, and is fostering dialogue between the Catholic Church and contemporary culture. The Holy See is also actively engaged in inter-religious and intercultural dialogue.

The principles underlying the Church’s cultural activities may be summarised as follows:

The Holy See is a signatory of the European Declaration on Cultural Objectives (Berlin 1984) and adheres to the European Cultural Convention since 1962. It sees the declaration as a major step to generate a common awareness among policy makers for concerted action in the cultural sphere. The values incorporated in the document inform the action plan of the Holy See.

From the 19th century to the present day, the Catholic Church has been building a body of doctrine on social life and the fundamental issues of human life. These commitments include the freedom of every human being, respect for each individual and the struggle against all forms of discrimination.

The objectives of the Holy See’s cultural policy are contained in the foundational letter of the Pontifical Council for Culture (1982):