Ukraine is a multinational state, with an established tradition of peaceful multi-ethnic coexistence. According to the 2016 data of the ministerial Department for Nationalities and Religions, representatives of more than 100 nationalities are residing in Ukraine.

According to the State Statistics, the population of Ukraine in November 2017 was 42.1 million persons. Cultural minorities constitute about 9 million or 21.3% of the population. The main minority groups in Ukraine are: Russians, Belarussians, Moldavians, Crimean Tartars, Bulgarians, Hungarians, Romanians, Poles, Jews, Armenians, Tartars, Roma and others.

The number of registered immigrants by the Ministry of Internal Affairs in 2016 was approximately 250 000. They arrive, in general, from such countries as the Russian Federation, Moldova, Belarus, Georgia, Armenia, Azerbaijan, and Syria.

The existing legislation defines all Ukrainian citizens (“Ukrainian people”) as belonging to two major categories: either the ethnic Ukrainian majority (“Ukrainian nation”) or one of the “national minorities”, without distinguishing indigenous nations (for example, Crimean Tatars), autochthonous groups or “classical” national minorities (Russians, Jews, Romanians, Hungarians, Roma, Greeks etc.), and Diaspora groups, or ethnic minorities that have arrived in the Ukraine following recent migration processes. However, the draft Law on Concept of the Public Ethno-National Policy of Ukraine (approved in September 2013 by the Government) contains definitions of “indigenous people”, “national minority”, “national identity” and others, which may be assumed as the basis of future diversity policy. Unfortunately, this draft law is still not adopted in 2017 by the parliament. In November 2015, the Parliament Hearings “Role, significance and influence of civil society for the formulation of ethno-national policy of the unity of Ukraine” adopted the resolution urging acceleration of consideration of the amendments to the Law of Ukraine “On national minorities in Ukraine” (new wording), #1111 of 28 November 2014, and indicating that “without a respective conceptual basis for directions, priorities, tasks and objectives the modern state ethno-national policy would be inefficient”.

There are several sub-ethnic groups in Ukraine, which, historically, are closely linked with the Ukrainian nation. Due to specific geographical and regional conditions, however, and, mainly, due to influences of various states and empires under whose jurisdiction they had developed over considerable periods of time, they now have different traditions, customs, dialects, etc. These include Hutsuls, Boyky, Lemky – from the Carpathian region, Polischuky – from the Polissia region, and Carpathian Ruthenians. The latter, on behalf of their leaders and some representatives of the Ruthenians diaspora in the USA, Canada, Slovakia, Hungary, Czech Republic, try to obtain recognition of Ruthenians as a separate nation or, at least, a national (autochthonous) minority.

Shortly after independence in August 1991, the Verkhovna Rada of the Ukraine condemned the offences of the Soviet regime towards national minorities and declared the recognition of international norms of law in this sphere in a document entitled Appeal to Ukrainian Citizens of All Nationalities.

In November 1991, the Parliament of the Ukraine adopted the Declaration of Rights of Nationalities in the Ukraine, which provided rights to minorities to pursue their respective language and culture. In the same year, national minorities also took part in a referendum on the independence of the Ukrainian state.

The Constitution of the Ukraine declares in Article 11 that “the state provides support for the development of ethnic, cultural, linguistic, and religious originality of all indigenous nations and national minorities of the Ukraine”.

Rights of national minorities are also represented in:

The Congress of National Minorities of Ukraine (CNMU, founded in 2002)is an All-Ukrainian non-commercial union of organizations of national minorities of Ukraine created with the aim to unite efforts of ethnic communities in the defence of rights, integration of communities into the civil society of Ukraine, tolerance education and combating xenophobia. Since 2002, CNMU works on projects for Ukrainian youth aiming at international and interreligious tolerance education.

The Annual Children’s Summer School “Sources of Tolerance” was created in 2002. The project is aimed at international and interconfessional tolerance education, combating xenophobia, forming of an active civic stand for children who are the representatives of different ethnic communities, and disseminating knowledge on national diversity in Ukraine and other countries. 200 children (from 7-17 years old) and 40 tutors from 19 ethnic communities of Ukraine, Moldova, Belarus, Georgia and Armenia (Assyrians, Belarusians, Koreans, Hungarians, Bulgarians, Armenians, Ossetians, Georgians, Greeks, Gagauzians, Jews, Crimean Tatars, Moldavians, Germans, Poles, Russians, Romanians, Tatars, and a considerable group of Ukrainians) took an active part. A group of refugee children from Afghanistan, Iran, Iraq, Azerbaijan, Angola and the Chechen Republic also participated in the Summer School. Summer School works by a unique methodology of absorption. This methodology assumes daily lessons during which all participants try to live as the representatives of a certain culture. In addition to 14 National Days in the Summer School, there were also Human Rights Day, Festival of Languages and Citizenship Day. Tutors are representatives of ethnic communities of Ukraine including specialists who have specific preparation during CNMU seminars. In 2010, 6 tutors from Georgia and Armenia underwent a study course in the School. The Summer School was organized by the CNMU with the assistance of the Ministry of Culture of Ukraine, the Euro-Asian Jewish Congress, the Renaissance Foundation, the Danish Refugee Council and other charity organizations, sponsors and private individuals.

The region of Transcarpathia is home to 60 000 persons of Roma ethnicity, who constitute about 75% of all Roma living in the Ukraine. Many Ukrainians associate this area with “tsyhany” – gypsies. Cities of Uzhgorod and Muhachevo have the largest number of Roma living in urban areas in Transcarpathia. They have been settled here for hundreds of years (see chapter 2.5.1).

By 2013, the religious network in Ukraine consisted of 55 religions.

The breakdown by religions shows the predominance of Christianity (including Orthodox, Catholic and Protestant churches) in Ukraine, which embraces 94% of all religions. The Ukrainian Orthodox church consists of 12 895 organisations constituting 34.8% of religious institutions in Ukraine.

The All-Ukrainian Council of Churches and Religious Organisations established in 1996, today plays a pivotal role in the inter-confessional dialogues uniting above 95% of the religious network. It consists of representatives of Christian, Judaic and Islamic churches and organisations.

The Ministry of Culture resumed in 2014 the work on the draft Law on the Concept of State-Confessional Relations in Ukraine taking into account the new reality and new challenges.

EuroCamp is an international project uniting teenagers from Ukraine, Georgia and Moldova. 12-16 year old boys and girls can pass summer or winter days in Carpathian Mountains discovering the world of a European community. Young people in the EuroCamp actively communicate between themselves and with leaders of the camp, learn to work in teams, think critically, explore creative solutions and perform. Learning these social competences would develop personal skills of social resposibility, tolerance, wide democracy, laying foundations for the 21st century generation. 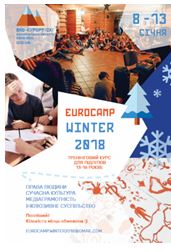 The EuroCamp is a unique opportunity for youngsters from Ukraine (in particular, internally replaced persons), Moldova and Georgia to find new friends along with motivation and inspiration for their own development and projects.

Source: Website of the Congress of National Minorities of Ukraine – http://kngu.org/uk/node/11