After the collapse of the Russian Empire in 1917, a “Ukrainian People’s Republic” was proclaimed and was led by outstanding personalities from the cultural field. According to the Presidential Edict #17/2016 of 22 January 2016, the year 2017 was announced as a Year of the Ukrainian Revolution 1917–1921. The Edict determined the commemoration of events and prominent participants of the Ukrainian Revolution 1917–1921 as one of the priorities in state agency activities for 2017–2021. The list of events and personalities was prepared by the Ukrainian Institute of National Remembrance jointly with the National Academy of Sciences and representatives of civil society. 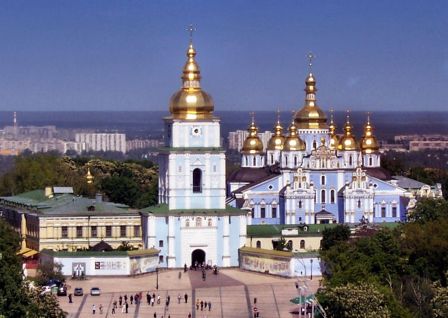 Unfortunately, the first Ukrainian state was short lived. Just four years later, in 1921, Ukraine came under Soviet totalitarian rule which lasted for 70 years. Although the official Soviet propaganda declared this period the “Golden Age” of national cultures it was in fact characterised by the forced deportation of entire cultural communities (Crimean Tatars, German settlers in Ukraine) and severe repression of the national intelligentsia. As N. Khruschov reported at the special closed XX Congress of the Communist Party of the USSR, Stalin had intended to deport all Ukrainian people. Compared to other territories of the former Soviet Empire, the persecution of the bearers of national ideas in Ukraine was more wide-spread and of greater brutality. Whereas the population of the Ukrainian SSR constituted only about 17% of the total Soviet Union population, the share of Ukrainians among the “prisoners of conscience” in the Soviet GULAGs (concentration and labour camps) was more than 50%. In 2017, 80 years has passed since the Soviet executions in Sandarmokh, the forest massif in the Republic of Karelia, where over 9,500 people of more than 58 nationalities were shot and buried in 236 communal pits over a 14-month period in 1937 and 1938. There, prominent Ukrainian intellectuals, brilliant writers, poets and playwrights, scientists and politicians, commanders and leaders, the real cream of the Ukrainian nation, were shot. Also, in October-November of 1937, 1111 victims were shot, among which there were 170 Ukrainians.

Shortly after the Second World War and during the first half of the 1950s, Ukrainian cultural policy was subject to the principles of the totalitarian state. This included strict centralism. Cultural institutions acted as intermediaries between the official state ideology and society. Through the ideological departments of the central and local communist party committees, the state decided which kind of culture was necessary for the people, and saw to it that cultural and artistic events remained on the “correct” political course. All artists’ associations and unions (writers, painters, theatre workers, and architects) were administrated by the state through respective party units operating within these institutions. Independent artists or artists’ organisations could not exist outside of this framework. The state also controlled all amateur arts, popular and other non-professional or voluntary organisations in the cultural field. Private cultural entrepreneurship officially didn’t exist.

Though the Soviet ideological machine was oriented to brainwashing, disseminating the achievements of “correct and democratic” world culture, it was possible to read “between the lines”, absorbing modern ideas and a “wind of change”. At the same time, special attention was paid to the cultural education of young people and to the development of young talents. There was also broad support for amateur and folk art activities and for book publishing. At the regional level, a vast landscape of cultural infrastructure was created and supported by additional budget subsidies. Their operations were not, however, guided by principles of efficiency or meeting the real needs of the communities involved.

On the 24th August, 1991, the Ukraine became an independent national state, signified by the Parliaments (Verkhovna Rada) approval of the Declaration of Independence of the Ukraine. This Act coupled with the results of the All-Ukrainian Referendum of 1 December 1991, when more than 92% of the citizens voted for independence, put an end to ideological dictatorship and created the conditions necessary for the comprehensive development of a national culture.

There was, however, a drastic decrease in public support for culture due to political instability, the economic crisis, and contradictions between democratic goals and market conditions. The lack of a clear medium-term and long-term cultural development strategy resulted in the creation of ad hoc policies at the central and local levels. They are aimed, in most cases, at preserving the existing situation. This situation, along with declarations about false achievements, has provoked indifference and distrust in a large part among the artistic community towards the government.

Dissatisfaction within Ukrainian society became apparent, especially after the events of the so called “Orange Revolution”. During the first “post-Orange” months, many meetings, conferences and round tables were organised by dissatisfied artists and cultural producers. Many appeals, requests and letters to change the situation were adopted and submitted to the President and the government. As a result, some new structures (public boards) were established at the Ministry of Culture and in the Presidential Secretariat.

The Presidential Edict of 24 November 2005, N 1647/2005, proclaimed that “ensuring the enrichment and development of culture and spiritual heritage of the Ukrainian society is one of the high-priority tasks of the Cabinet of Ministers”. One of the first laws signed by the President V. Yuschenko was the Law of Ukraine on the Conceptual Framework of the Public Cultural Policy of Ukraine (2005) which proclaimed that the main outcome of the Conceptual Framework implementation should be the recognition of culture as a key factor of social and economic development on the national and local level, and cultural policy as a strategic priority direction of the overall state policy.

In May 2007, the Council of Europe adopted the National Report on Cultural Policy in Ukraine (CDCULT(2007)14), along with the Experts’ Review (CDCULT(2007)15), becoming the 27th country to complete this procedure for the CoE. (You can find both texts of the National Report and the Experts’ Report on https://www.coe.int/en/web/culture-and-heritage/national-reviews#{%2219677858%22:[11]} or on http://www.mincult.gov.ua – Ukrainian versions).

By the end of 2008, the government adopted the draft Concept of the State targeted programme for innovative development of Ukrainian culture in 2009-2013. The Programme will improve the budget allocation process, increase the share and effectiveness of cultural expenditure, modernise mechanisms for attracting non-budget funds, regulate legislation, and modernise the governance system. Despite the good intentions outlined in the Programme, it is till in draft form, and like the Law of Ukraine on Culture (2011) – see below – could become outdated.

On 14 December 2010, the Ukrainian Parliament adopted the new Law on Culture which was gradually developed and improved since 2005. After being signed by the President of Ukraine on 6 January 2011, the new Law on Culture (№ 2778–VI) replaces the former Fundamentals of the Legislation on Culture of Ukraine (1992, with amendments). The new law determines the legal foundations of cultural activities, regulates social interrelations related to creation, use and protection of cultural values, and defines priorities of public cultural policy. See also above and chapter 2.1.

Social and political confrontation in Ukraine started in November 2013, which led to the “Revolution of Dignity”, and complete reform of the government, including the Ministry of Culture. The gap between official and informal culture became apparent and threatened to deepen. On 27 February, a new Cabinet of Ministers was elected by the parliament after previous approval by the popular assembly at Maidan. The new Minister of Culture, the “voice of

Maidan”, Yevhen Nyschuk, declared that the whole structure of the former ministry would be changed as well as the national cultural strategy. However, this declaration didn’t lead to any sensible result.

After extraordinary elections of Verkhovna Rada of Ukraine (Parliament) at the end of October 2014, the new government was formed at the beginning of December 2014, including the Ministry of Culture. Viacheslav Kyrylenko, a well-known politician, took up the post of Minister of Culture and Vice Prime Minister on humanitarian issues, at the same time.

The renewed ministry, including new deputy ministers, continues to develop a long-term cultural strategy, as well as short-term tasks, based upon the groundwork of their forerunners (particularly, strategic working group: http://culture2025.org.ua/), Cabinet of Ministers’ Action Programme and the Coalition Agreement between policy parties.

In February 2016, the Cabinet of Ministers of Ukraine approved the Long-term Development Strategy of Ukrainian Culture (Strategy of Reforms) based on extensive culture research by public and non-governmental organizations. The Strategy states “determines the main activities which should take culture out of margins” and lays a reliable foundation for sustainable innovative and cultural development of Ukraine.

On 14 April 2016, the Verkhovha Rada of Ukraine assigned a new Government (Cabinet of Ministers) and appointed, again, as a Minister of Culture Yevhen Nyschuk. Restructuring was declared as a main task and priority of cultural policy.

Article 4 of the Law of Ukraine on Culture establishes that priorities of public cultural policy shall be determined by state programmes of social and economic development of Ukraine which should take into account aspects of cultural development. “The government shall create on a priority basis conditions for: development of culture of the Ukrainian nation, indigenous peoples and national minorities of Ukraine; maintenance, restoration and protection of the historical environment; aesthetic education of citizens, first of all, children and young people; and enlargement of the cultural infrastructure in rural areas.”

Article 6 (point 1) of the Law of Ukraine On Principles of State Regional Policy (2015) establishes that one of priorities of the state regional policy is “stimulation and promotion of local initiatives related to the efficient use of internal capacities of regions for creating and supporting a full-fledged living environment and improving living standards”. The explanation to the law indicates that internal capacities of regions consist mainly of culture and cultural heritage (tangible and intangible).

The Law of Ukraine on Culture (2011) proclaims the following objectives or main principles:

The Ministry of Culture of Ukraine has prepared in September 2017 the necessary documents for a Presidential Edict to announce 2018 year as the Year of Ukrainian Cultural Heritage, which will coincide with the Year of European Heritage announced by the Council of the European Union and the European Parliament. It means, as the Minister of Culture stated, that each town should envisage funds for renovation of its museums, reserves, palaces and monuments, even of local significance”. At the same time, one will expect that the main goals of the European Year will be “to promote cultural diversity, intercultural dialogue and social cohesion”.

A Ukraine Cultural Policy Peer Review prepared by the Council of Europe in 2017 (13-15 March) states that the Government, besides others, needs to establish a clear vision for cultural decentralization. It needs to be clear about the benefits that will be achieved. The Ministry of Culture should develop a communication strategy aimed at local authorities and stakeholders to convey its vision and promote culture as a driver of local social and economic development. The Ministry of Culture should be resourced to control implementation of the reform, notably with a view to: