In the 1990s the issue of historical significance in the cultural field in Russia was a transition from the Soviet model of cultural policy to a new one.

Cultural policy in the Soviet Union was part of the “Marxist-Leninist” ideological policy of the Communist Party that also broadly used education and enlightenment for party purposes. This system was basically formed in the 1920s and the 1930s. In the 1940s, it evolved and emphasised the strengthening of historical identities. This system remained mostly unchanged until the late 1980s, 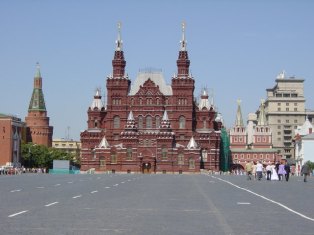 Priority was given to those cultural instruments with the greatest potential to disseminate information: radio, film, the press and, from the 1960s onwards, emphasis was placed more and more on television. The main task of a system of so-called “creative unions”, covering the main art forms, was to control the artistic community and intelligentsia and organise their professional activities according to the needs of the Communist Party.

In 1953, the Ministry of Culture of the Soviet Union, and then those of each of the Soviet Republics, was established. The result was closed bureaucratic machinery for the administration of culture, which corresponded to the general system of government. Despite this system, national cultural life was multifarious and diverse because mass involvement in officially organised cultural activities was one of the political goals. As soon as control slackened, latent tendencies became visible. In the late 1950s and early 1960s, Khruschev’s reforms and the so-called “thaw” raised aspirations for liberalism, including in cultural life. However, the change that followed was Brezhnev’s “zastoi” – with its slogan of creating a new identity – “the Soviet People”.

In the mid-1980s, Gorbachev initiated real changes, decreasing ideological pressure on the mass media and administrative control over cultural and educational institutions. The intelligentsia, artists, and cultural workers became the most ardent supporters of “perestroika”. In 1990, the Law on the Press and other Mass Media eliminated state censorship, thus proclaiming abolition of ideological control. By the early 1990s, the state had also curtailed its involvement in regulating cultural matters. As the economic and political crisis culminated, the state lost interest in cultural issues… and the Soviet Union collapsed.

In December 1991, the Russian Federation (RF) was established as a new independent state; the rule of the Communist Party was banished; the Soviets of People’s Deputies were re-named Dumas (as in the twilight of the tsarist Russian Empire); but the complex federal structure of the former RSFSR(Russian Socialist Federative Soviet Republic)was maintained. A period of radical transformation in the political, social and economic systems began and recently it was described as “a decade that shocked culture”.

At first, the main goal of federal cultural policy was to guarantee freedom of expression, to preserve cultural heritage and the network of state cultural institutions. In June 1993, the government of the Russian Federation approved these goals and they formed the basis of the Federal Programme for the Development and Preservation of Culture and the Arts, 1993‑1995. The state was also inclined to curtail its engagement in the cultural field, hoping for self-supporting activities of cultural institutions, market regulations and sponsorship. The latter was only to develop in Russia in the 1990s, when financial problems were deeply felt across the complete cultural landscape. The task to renew the total legal base of the culture sector emerged.

In the mid-1990s, the work undertaken to elaborate the National Cultural Policies Report helped to compare Russian priorities with those developed on the European level. The Federal Programme of cultural development for 1997-99 articulated social and political goals directed more towards development than preservation, but due to the ongoing political and economic crisis, those goals, especially that of development, have not been achieved. However, cultural life diversified, changing preferences and consumption patterns.

Public debates were focused on the contradiction between the high social status of culture and the under-funding of the cultural sector. The budget for culture was reduced several times and, therefore, was limited to salaries of those working in cultural institutions; that made the fight for resources the first priority. 1999 was the first year that the state cultural budget was achieved, which indicated a turn towards stability. However, public reverence for culture and the arts, particularly for high culture and artistic quality, diminished drastically. It was substituted by mass culture and entertainment, regarded primarily as commercial activities.

On the eve of the 21st century, it was widely acknowledged that withdrawal of ideological control and providing freedom of expression was not enough to support cultural development. Public discussions on cultural policies were centred on two opposite poles: expanding state support for cultural productions and for all types of cultural institutions that carried out important socio-cultural functions or shortening the list of institutions, monuments, etc. supported by the state and changing their legal status, including privatisation.

Since 2003, the Federal Government, in the spirit of better transparency and more effective budget spending:

In 2004, the Russian Government system was re-organised within the framework of administrative reform. The federal executive bodies were arranged in three levels: political (ministry), controlling (supervising service), and administrative (agency).

The aim of better governance of the culture sector involved addressing its scope and related responsibilities. As regards the responsibilities, at different times the federal culture Ministry was also in charge of tourism or mass media; at the regional level, the agencies responsible for culture may be also in charge of youth policies, mass media, tourism, ethnic affairs, etc. On the other hand, the administrative reform mentioned above has re-distributed responsibilities between the levels of governance. The management of cultural institutions’ networks was passed to the regional and municipal (local) levels and thus their funding was made dependent upon related budgets.

According to the Basic Law on Culture (1992), state cultural policy (or state policy in the field of cultural development) means both principles and norms that the state follows in its actions to preserve, develop and disseminate culture and state activities in the field.

During the past decade, cultural policy priorities shifted from state administration of cultural institutions and funding, mainly heritage preservation, to more diverse principles of managing cultural affairs. Accordingly, the cultural policy model evolves from being centralised and based on state governance to a more complex and commercialised one. New cultural policy-makers emerged, including local self-governments, private actors; the cultural economy and cultural management became more sophisticated.

The measures of general political and administrative character deeply affect the cultural sector because the state remains the main cultural policy player. Decentralisation of responsibilities, an increase in cultural responsibilities of regional and local policy-makers, support for desetatisation of cultural institutions and heritage objects, together with the development of contemporary arts, media culture, cultural industries and entertainment, which are almost independent from state cultural policies, make the cultural landscape more diverse and uneven.

At the regional level, attempts were made to introduce an innovative cultural policy model oriented towards higher competitiveness of cultural institutions, wider access and participation in cultural life (e.g. see the Perm Krai profile). However, opinions divided and the change of the Perm Krai Governor (2012) was followed by winding down innovative projects and practices. Nevertheless, grant giving and competing for financial support are becoming more and more important for cultural policy making.

Cultural policy aims to exercise the constitutional rights of Russia’s citizens (see chapter 4.1.1). Discussions that followed the National and European experts’ reports on cultural policy in Russia, and its presentation to the Culture Committee of the Council of Europe (1996), favoured the development scenario, which was in accordance with the ideas and principles set out in the documents of the Council of Europe and UNESCO. Since then, the aims of cultural policy, as formulated in official documents, emphasise the importance of classical culture and national cultural traditions, creativity and protection activities, access to culture and artistic education.

In 2008, the Concept of the Long-term Social and Economic Development of the Russian Federation (2008-2020) or “Strategy 2020” was presented by the Minister of Economic Development. It states development and realisation of both personal and social cultural potential as the main cultural policy objective within the general transition to the innovative economy and describes its principal directions as follows:

The governmental “Strategy 2020” links innovation to massive investment in human capital needed and relatively to the general development of education, science, and culture. It also proposes milestones and related indicators for the increase in the use of cultural institutions and in the quality of related facilities to modernise a network of state cultural institutions and to provide general and equal access to cultural goods and services.

The Culture of Russia (2012-2018) Federal Target Programme, which accumulates funding for the most important activities within routine culture management, states its targets as follows:

The new State Programme of the Russian Federation on Development of Culture and Tourism for the period of 2013-2020 is under discussion. It states its main goal as follows: to implement the strategic role of culture as the spiritual and moral foundation for development of an individual and the state, for the integrity of Russian society. The three tasks are to be fulfilled to achieve this goal, which are as follows: