After World War II, the Republic of Macedonia[1] became part of the Yugoslav Federation; therefore, its cultural policy was subject to the state ideology of building up a socialist culture. Over the past sixty years, cultural policy went through three main development stages: 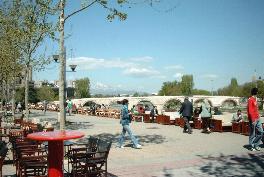 After 1945, the role of the government in culture was vastly extended. New institutions were established, programmes were set up to train qualified staff to run these institutions and the culture and the arts were popularised. In the past, Macedonian culture hardly had an opportunity to flourish as its own national culture. It is therefore understandable that there was a certain amount of national and romantic spirit throughout this period.

Following a long period of strict centralism, Macedonia entered, like other Yugoslav Republics, a period of self-management in the mid-1970s which offered certain opportunities to develop democratic elements, similar to that of other European countries. Municipal cultural institutions were created and were completely financed by the 31 individual local communities. While promising in theory, steps towards decentralisation became “suffocated” by bureaucratic incompetence, lack of professionalism and a thicket of regulations. In the 1990s, after the country gained independence from Yugoslavia, the cultural policy once again became politically and administratively centralised. The municipalities lost all the competencies they had gained in the field of culture.

There was no explicit cultural policy document which outlined a specific strategy and / or goals of cultural development, and therefore, one could hardly speak of a consistent cultural policy after 1990. The Constitution and the 1998 Law on Culture provided a certain global orientation toward culture including provisions for civil rights and freedoms, minority rights, the obligation of the government to support and develop culture, etc. However, in practice, there is still a combination of the old and new pragmatism and ad hoc temporary solutions. Today, the term culture is still equated with the term art.

As early as 1945, Macedonia has been organised as a multicultural country. The Ministry of Culture financed the activities of institutions such as the Theatre of Nationalities (Turkish and Albanian Drama, established in 1947), as well as several cultural associations (amateur and professional), vocal and dance folk groups, etc. Daily newspapers and weekly magazines, monthly children’s magazines and radio and TV programmes were available in the respective languages of different cultural communities. Writers, artists, actors, musicians etc., of all the nationalities (Albanians, Turks, Serbs, Romans etc.) were members of the same professional associations together with the Macedonians.

After 1990, the once “homogeneous” society started to slowly disintegrate. It turned out that some communities (especially Albanian) were not satisfied with the overall cultural policy in the past or with state support and provisions for cultural minorities. Certainly, the process of democratisation has encouraged the communication of different views and perspectives, also with regard to the culture of minority communities. It has also helped to point out mistakes made in the past. For example, many private publishing companies were established (over 80% of them Albanian) in a very short period of time after 1990 in order to compensate for the lack of books in the languages of different minority groups. Numerous private radio and TV stations were opened and started to broadcast programmes in minority languages (most of them Albanian and Roma). Several new festivals were established to promote the culture of minority groups. Several new associations and NGOs started to work etc. The Ministry of Culture financially supported most of these activities (except radio and TV).

The ethnic conflict in 2001 (re-)opened certain multicultural questions and the treatment of minority rights (primarily of the Albanian ethnic population) in the field of culture. Following the conflict and the institution of the Ohrid Framework Agreement, the Constitution was amended with some specific provisions for the different cultural communities (see also chapter 2.7). Some experts say that “the Ohrid Framework Agreement is a new vision for a Third Republic, which is to be radically different from the first one established with ASNOM (Antifascist Parliament of the Peoples Liberation of Macedonia) in 1944, and the second one, inaugurated with the Constitution of the Republic of Macedonia”. It means specifically that the constitutional amendments from 2001 establish citizenship in the country for all nationalities or ethnic groups living on its territory and adopting its Constitution – the Macedonian people and parts of Albanian, Turkish, Serbian, Roma, and Bosnian people. In this context, some experts say that Macedonian traditions should be kept up and, consequently, the country should become “the pilot-state of 21st century multiculturalism”.

[1] In accordance with UN Resolutions 817 and 845 /1993, “the Former Yugoslav Republic of Macedonia” is currently being used by the Council of Europe and the European Union as the provisional designation of the country in official and internal documents. Except in the historical parts of the present (non-official) text, this designation is referred to, even if abbreviated in some places for editorial reasons.

The general objectives of cultural policy are provided via the Constitution: civil rights and freedoms, creative autonomy, the obligation to support and develop culture, the right of the different ethnic or national groups to establish institutions for culture and art, the protection of the cultural and historical heritage, etc. During the first decade after gaining independence there was no global, recognisable concept behind the cultural policy system, neither did it follow any particular model. Any developments and changes in the cultural policy “system” were ad hoc and driven by political movement towards decentralisation, multiculturalism etc. The Law on Culture (1998) identified some objectives as being of “national interest”, such as establishing general conditions for the continuity of culture; creating favourable conditions for outstanding cultural achievements; encouraging cultural diversity; cultural development etc.

Since the introduction of budget financing in the cultural sphere in 1990, financial resources are being allocated to the institutions on a yearly basis for the following items: salaries and other allowances (i.e. per diems and travelling allowances for the permanently employed staff), allowances for annual programmes, investments, heating of buildings, insurance of equipment, buildings, exhibitions, etc.

However, changes took place in the following areas:

In December 2003, the government passed the Decision on the Network of National Institutions in the Field of Culture. It provided the framework within which the network of the cultural institutions (national and local) was to be organised and re-allocated responsibilities for culture to the municipalities.

After the constitution of the new coalition Government (June 2017), in May 2018 a new National Strategy for Cultural Development in the Republic of Macedonia 2018-2022 was adopted by the Parliament.

The Law on Culture (1998) specifies some cultural objectives as being of “national interest”, e.g. establishing general conditions for achieving continuity in culture; creating conditions for outstanding cultural achievements and their protection; encouraging cultural diversity; protecting and developing the cultural identity of different communities; cultural development etc.

On the other hand, according to the National Programme for Culture 2004-2008 (which was the first of its kind in Macedonia), the main cultural policy objectives were:

In May 2018, a new National Strategy for Cultural Development in the Republic of Macedonia 2018-2022 was adopted by the Parliament. Its general goals are equal cultural rights for all and freedom and diversity for artistic creation and cultural identities. One of its specific goals is structural reform in the field of culture.

The new National Strategy for Cultural Development also defines principles of the strategic development, as follows:

The document also formulates the basic principles of the cultural strategy and the main directions of the reforms, the basic instruments for realisation of the priorities, the necessary reforms in the Ministry of Culture, strategic plans for each cultural domain etc.

The document is followed by an Action plan for implementation of the Strategy, including necessary measures, expected effects and indicators, as well as terms and financial indicators.

The opposition did not support the new National Strategy.