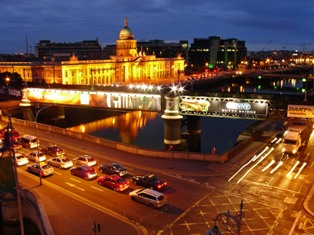 For the most part, the history and character of the Irish system for policy development and funding of the arts since the founding of the state in 1921 is coloured by a number of factors:

During the first thirty years of its existence the Irish state did not establish any formal instrument for cultural policy development. In a country with little tradition of patronage, institutional or otherwise, the arts were seen as a luxury, which the new state could not afford. Thus the story of this period is one of official neglect.

The Arts Act of 1951 and the subsequent appointment of An Chomhairle Ealaíon, the Arts Council, as an autonomous arm’s length agency, under the aegis of the Department of the Taoiseach (Prime Minister) was the first expression of an awareness of the need to address the area of cultural development.

Despite some gestures in the 1950s and 1960s (notably – and uniquely – the according of tax free status to artists for their creative work), government did little to alter the general policy vacuum. The mood of the 1960s was apparent in the demands of the arts sector. Institutional change tookplace with the introduction of the Arts Act in 1973. This set out the composition of the reconstituted Arts Council and made provision for elective funding of the arts by local government.

The transfer of responsibility in 1975 for the funding of a number of major arts bodies to the Arts Council established further the Council’s status as the state vehicle for the arts. Despite low funding, from this period dates the more independent stance of the agency as well as a greater seriousness of intent in relation to its brief – in particular regional development and education. In 1978 a system of programmed co-operation was established with the Arts Council of Northern Ireland. The funding crisis persisted, exacerbated by greater public demand arising in part from the Council’s own initiatives.

The launch of the new honours system Aosdána in 1983, providing institutional recognition and support by the state for distinguished creative artists, was universally hailed as the culmination of a series of Arts Council policies in support of the individual creative artist. The publication in 1987 of the Government White Paper, Access and Opportunity, reconfirmed the role of the Arts Council but the promised doubling of funding by 1990, via the National Lottery, failed to materialise. In the early years the advent of a new stream of funding from the Lottery (from 1987) afforded some relief to the Arts Council. Twenty-eight percent of the overall funding of the Arts Council from 2001 to 2006 came from the National Lottery and was subsumed into the overall grant-in-aid to the Council.

It was not until 1993 with the establishment of the Department of Arts, Culture and the Gaeltacht that the planning context for the arts in Ireland took a step forward. This Department was the first significant attempt by government to bring the state apparatus for cultural support under the aegis of one body and also most importantly, gave the sector full ministerial representation. As part of a numberof Departmental initiatives embracing broadcasting, heritage, film and the Irish language, the Arts Council was invited in 1995 to prepare the first plan for the arts. This resulted in an immediate doubling of funding to the Council. In addition, a programme of significant capital investment in the physical arts infrastructure throughout the country was launched by government (using EU structural funds). The appointment of specialist arts personnel by local authorities also accelerated in the 1990s.

In 2003, The Department of Arts, Sports and Tourism brought into effectthe Arts Act 2003 which:

Now the Department of Arts, Heritage and the Gaeltacht (DAHG) holds the brief for the arts, culture, film and music as well as oversight of Ireland’s national cultural institutions; the built and natural heritage, the Irish language, the Gaeltacht and the islands and some aspects of North / South cooperation. Other cultural functions have been distributed to different government departments (see chapter 1.2.1 and chapter 3.1). Developments in local government have brought about significant advances in regional arts provision.

Subsequent to 1995, government funding for the arts had been provided on the basis of a planned approach by the Arts Council. Coinciding with the economic boom, government funding had grown to the point where in 2006, for the first time, the Arts Council received exactly what it requested from government. The National Development Plan 2007-2013 made provision for a total of 1.13 billion EUR for the arts and culture. Since 2008, with the dramatic economic downturn, this funding trend has suffered a rapid reversal with swingeing cuts to Department and arts funding (over 30% cuts to the Arts Council), despite strong sectoral advocacy.

The economic crisis has bitten deeply into the arts sector and continues to do so.  Not only in funding but through a retrogressive recentralisation thrust, the infrastructure of the arts is being eroded in ways that inhibit the development of creativity and cultural life in Ireland.  A recent softening in the 2015 budget offered nothing significant to the arts sector.  The tale has thus reverted to that of the official neglect which has characterised the arts in Ireland since the foundation of the state.

As articulated in the Arts Act 2003, the overarching policy role for the cultural sector rests with the Department of Arts, Heritage and the Gaeltacht (DAHG) (the latest of many denominations of the Irish arts ministry). The Cultural Institutions Division of the Department provides the legal and policy framework for Ireland’s national cultural institutions and heritage. The policy framework had been epitomised by the National Cultural Institutions Act 1997 (currently under review – see also chapter 2.1 and chapter 1.3.1) which made provision for institutional autonomy, provides powers to government to give a state indemnity to visiting collections and artworks, makes provision for a register of cultural objects, export licences and so on. The autonomy of the Arts Council was preserved in the 2003 Arts Act and the Council has never protested publicly at any diminution of this status. It is however fair to add that it is constrained in so doing by virtue of its funding dependence. A determination on the autonomy of the Arts Council would require a granular study of Department / Arts Council relationships and an independent examination of policy implementation in recent years. There is certainly evidence to suggest that as the Department funding has weakened, there has been a civil service move to wield power more centrally i.e. by the DAHG and away from the Arts Council,  and in a manner that has been widely criticised by the arts community. A searing example of this is the current dismantlement of the National Cultural Institutions Act, 1997.

Since 1995 the Arts Council has identified priorities expressed in plans of three to five years duration, which are evaluated and form the basis for government funding of the arts,subject to available resources. Beset by dramatic funding and staffing cuts, the Arts Council has undertaken a strategic review in 2014, the report of which has been published: Inspiring Prospects http://www.artscouncil.ie/uploadedfiles/inspiring-prospects-report-2014.pdf. Historically the local authority role in cultural development in Ireland, driven by the Arts Council, had represented only a small part of total national arts funding. This is a result of the highly centralised nature of the Irish state, the limited functions of local government (relative to other European countries) and the low funding base of local authorities. Local government in the 1990s gave it a more central role in arts and cultural planning at local level and since 2003 each of Ireland’s local authorities is required by government to devise a plan for the arts.

As more local authorities engage actively in arts planning, their contribution to cultural policy making became more significant, connecting the cultural dimension with a range of other drivers in the local environment and economy (see also chapter 1.2.2). Local authorities, while by now substantially committed to their arts role, are also severely challenged in meeting and maintaining their commitments in the current economic crisis. The abolition of a number of local authorities as part of the latest wave of local government reform will also have effects on arts funding and provision. Furthermore the establishment of a wide network of cultural facilities (in some cases of significant size) throughout the country during the boom years is now proving a further challenge to fund-starved local authorities.

One effect of Ireland’s crisis has been a push to encourage cooperation between arts organisations and various suggestions have been put forward to reduce costs through shared services. As part of a wider cull of the many unnecessary quangos and agencies established during the boom, the Department has determined in the case of the national cultural institutions, to roll back of the 1997 Act which established the autonomy of these bodies. The equation of the national cultural institutions with quangos has met with widespread opprobrium. The Minister has decided to bring some of the national cultural institutions back under the central control of the Department and government has agreed that the independent boards put in place by the 1997 Act will be effectively dissolved. Already Culture Ireland has been absorbed into the Department. In effect the repeal of the 1997 Act represents a recentralisation drive which is regarded by the arts community as retrogressive and likely to engender the stagnation that preceded its introduction. While the reasons given locate the recentralisation of culture in the overall cost-saving / efficiency aims of government, it is widely believed that this action, resulting in the most paltry savings, is aimed at shoring up a government department, widely perceived as of low priority and itself in danger of dissolution at different times.

The Department of Arts, Heritage and the Gaeltacht (DAHG) has overall responsibility for the formulation, development and evaluation of policy and structures in the arts and purports:

“to provide an appropriate resource, policy and legislative framework to support the stimulation and development of the Arts in Ireland, such that economic returns and employment, and access to and participation in the arts by all sections of Irish society, are maximised.”  (http://chg.gov.ie/)

The current priorities of the Department are outlined in a briefing document for the new Minister, appointed in July 2014 (https://www.chg.gov.ie/app/uploads/2018/07/statement-of-strategy-2018-2020-final.pdf). The Minister has repeated her predecessor’s commitment to the drafting of Culture 2025, a National Cultural Policy which will set out the high-level aims of the DAHG.

The Arts Council believes it should:

Additionally, the Arts Council has set out a number of proposals based on these tenets to inform its strategic planning. Described in Inspiring Prospects, the 2014 report of the Arts Council Strategic review Steering Group, this credo is founded on the conviction that the Council can no longer function as it did in the past. The degree of change anticipated is variously flagged as necessitating “hard choices” that will be “transformational” in making the Council a fully functioning development agency.