After the Second World War, Croatia became a constituent republic of the Federative Popular Republic of Yugoslavia, which inherited the ex-Yugoslav kingdom. Its cultural policy was designed to accomplish the mission of building up socialist culture. Art was governed by the canon of socialist realism and science and education were governed by the canon of dialectic and historical materialism. The inherited cultural infrastructure (museums, theatres, libraries, etc.) was reconstructed and reorganised in compliance with the new social system. 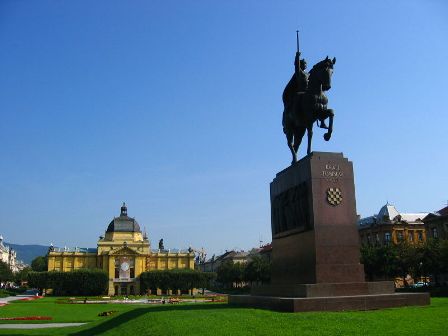 In the mid-1950s the self-management system was introduced. Cultural and other public domains (education, media, health, etc.) were decentralised and regulated on the level of the six constituent republics. The 1960s and 1970s were a time when cultural professionalism and creativity were emphasised as a reflection of the country’s multiethnic character. Western influences, mainly reflected in modernisation, and the global openness of the country (the policy of non-alignment) brought various cultural influences. Ideological control over culture loosened, followed by political liberalisation and greater autonomy of the republics in the federation.

The self-management system in culture and other public fields established a quasi-market economy. Instead of grants from the budget, special funds were created and their allocation was decided by bodies composed of providers and recipients of services. The overall political and economic crisis in the mid-1980s reflected the fact that this new system was mismanaged and non-functional. It became increasingly embroiled in the main political clash between federal centralists and republican co-federalists. These political clashes led to war in 1990 and to the dissolution of Yugoslavia.

In the 1990s, the cultural policy of independent Croatia was politically and administratively centralised and incorporated in everyday life with special emphasis on national traditions. It was designed to foster a sense of national cohesion, especially at the beginning of the period when the country was drawn into war. In the formal sense, the policy was formulated in general terms, emphasising market approach, freedom of creativity and professionalism. Cultural planning and funding gave priority to activities of “national interest” in culture and left all other activities to the emerging market and to NGOs.

Since 2000, when the new coalition government was elected, there has been a broader implementation of cultural policy with a particular stress on pluralist cultural orientations. A more balanced approach to tradition and a new evaluation of the national and the multicultural components has been undertaken, together with steps towards further decentralisation and direct co-operation with NGOs.

Research on cultural development and the status of culture in society has shown that the cultural NGO sector has been growing dynamically during the post-2000 period. This has resulted in the establishment of an “independent cultural sector” and has separated “institutional” (government subsidised) and “independent” culture (that was subsidised mostly by foreign sources) (see also chapter 1.3.3). During the following years the “independent” culture established some of its’ key points e.g., the City of Zagreb which has established and finances the POGON – Zagreb Centre for Independent Culture and Youth since 2008, and by the Ministry of Culture that proposed the Law on “Kultura nova“ Foundation, passed by the Parliament in July 2011. The foundation, which is dedicated mainly to the development of the independent cultural scene, is in full operation since December 2012.

In the period 2004-2011 there have not been any major shifts in cultural policy and overall cultural strategy. Major reforms were undertaken in the book sector, as well as in the media and audiovisual sector and performing arts, with the adoption of new laws, such as the Law on Audiovisual Activities, the above-mentioned Law on the Foundation ‘Kultura Nova’, etc. There was also a reorganisation in the government with a new division of portfolios. As a result, in 2004 the Ministry of Culture became responsible for the protection of nature and biodiversity.

The period 2005-2013 has been marked by the negotiations for Croatia’s full membership of the European Union, which has given a new impetus to developments in all sectors. The negotiations were completed in June 2011. Croatia became a full member of the EU on 1 July 2013.

In December 2011, the centre-left coalition came to power, and the government announced the priorities of the Ministry of Culture in its mandate: firstly, the development of cultural creativity and production, and secondly, the protection of cultural heritage (see also chapter 2.1). The Ministry of Culture ceased to be responsible for protection of nature and biodiversity, which became part of the purview of the Ministry of Environmental and Nature Protection. The new Decree Regarding the Internal Organisation of the Ministry of Culture was issued in February 2012 (NN 21/12) which introduced a reorganisation of several departments and the establishment of the media department strategic planning was stressed as an important part of cultural policy; cultural institutions and organisations have been obliged to include strategic plans as part of their applications for public funding (NN 69/12). Major changes in laws concerned the changes to the Law on Croatian Radio-Television which significantly reduced the independence of the HRT and resulted in a series of political appointments, a law on theatres, authors’ rights and related rights, and also the law on civil society organizations that introduced more bureaucratic obligations to CSOs.

In 2015 the new centre-right coalition government came into power and announced that its focus would be placed on the ‘homogeneous national culture’ and cultural heritage. Major protests by the cultural community resulted from the appointment of the new minister, with demands for his resignation. Consequently, the government fell after six months of being in power, and new elections were to follow in September 2016. However, in the short period of being in power, many actions were taken that destabilised the whole cultural sector and continued with the lowering of media independence standards in Croatia, namely through political pressure on HRT and the Agency for Electronic Media.

The general objectives of cultural policy in the last two decades have included the pursuance of values such as: cultural pluralism (aesthetic and multiethnic), creative autonomy, the increase and diversification of sources for financing culture, polycentric cultural development, encouraging cultural participation and co-operation between the public and the private sector to increase efficiency, quality, employment and innovation. The most ambitious goal is bringing culture into the focus of interest of all inhabitants of the country. The “Strategy of Cultural Development – Croatia in the 21st Century”, drawn up in co-operation between the Ministry of Culture and a team of independent experts and accepted in the Croatian Parliament in early 2002, gives a detailed presentation of these goals and the necessary instruments to achieve them. One of the key goals of the Cultural Development Strategy has been the democratisation of culture, intended to increase active participation in culture and to popularise art and culture in schools and through the media. However, since then no action plans were made in order to implement the adopted strategy.

Strategy of Protection, Conservation and Sustainable Economic Utilisation of Cultural Heritage of the Republic of Croatia (2011-2015) was adopted in July 2011. (For more information see chapter 3.1). The revised Strategic Plan of the Ministry of Culture for the period 2015-2017 was adopted in 2014 with some new goals elaborated with further stress on the development of cultural and artistic creativity and production on the one side, and on the protection of cultural heritage on the other (For more information see chapter 2.1).

Decentralisation is still an important subject of debate in Croatian cultural policy and practice, and has been highlighted in the Programme of the former government. However, no significant changes regarding decentralisation have been made during former or current governments. This process was further slowed down due to the lowering of income tax in 2015 which is primary source of income for local government that further influenced the decrease of funding for local government. There has been a continuous pressure on the central government to enable fiscal decentralisation, which is a necessary precondition for any other efforts in this direction (decentralisation of education, health, etc.). The model of cultural decentralisation still awaits public debate, revision, and an eventual possibility to be gradually implemented. Until recently cultural strategies on the local level were scarcely adopted; the only exception was the “Istrian Cultural Strategy” of the Istra County that was adopted in Poreč in 2009. However, in the last couple of years, selected cities have adopted them (e.g. Rijeka, Zadar, Varaždin, Osijek, Dubrovnik). This mainly can be attributed to the preparation of these cities for application to European Capital of Culture programme that obliges cities to have such strategies. Amendments to the Law on Cultural Councils in 2013 opened up the possibility of cities (or other municipalities) with more than 20 000 inhabitants to establish cultural councils. Further discussion on decentralisation and new territorial organisation of the Republic of Croatia will be very much influenced by the regional development strategies driven by the EU standards and priorities including NUTS regions as well as by announced changes of the tax system.

The process of decentralisation is also supported through the provisions in the Law on the Protection and Preservation of Cultural Assets (NN 69/99, NN 151/03; NN 157/03, Amend., NN 87/09, NN 88/10, NN 61/11, NN 25/12, NN 136/12, NN 157/13, NN 152/14, NN 98/15)which regulates the distribution of funds collected through the “monument annuity” fund and establishes the Registry of Cultural Assets. This Law ensures that 60% of the funds collected are used by the local governments in their respective city / municipality for the protection of cultural heritage. With the financial crisis and the changes in the legislation defining revenues from the monument annuity, the amount of funds collected through this scheme is decreasing, which is limiting the ability of local communities to invest in cultural heritage restoration.

The principles of promoting identity and diversity, supporting creativity and participation in cultural life were set up in 1990 as part of the declared cultural policy objectives in Croatia and have not been significantly changed since then. These principles are being put into practice in the following way: