Governments in Canada at the federal, provincial / territorial and municipal levels have long intervened in culture. Cultural policies in Canada are based on a variety of factors including perceptions of the public good, the national and regional interests, economic growth, social benefits, Canada’s two official languages and multicultural society, foreign trade and investment opportunities. 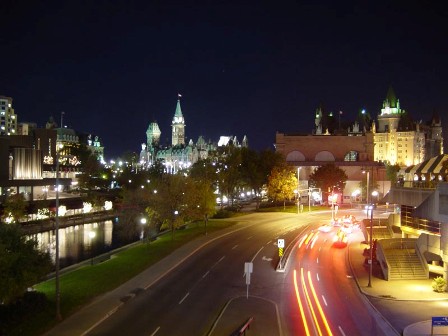 Canada’s cultural fabric has been shaped by a small and geographically dispersed population, limited economies of scale and high costs of production, the ubiquitous proximity and presence of the United States of America (the world’s largest and most influential cultural super-power) and a unique blend of multicultural demographics, official linguistic duality (French and English) and diverse Aboriginal cultures. The ongoing development of a national cultural policy, or policies, for Canada by the federal government has focused on the need to protect and affirm Canadian cultural sovereignty and to promote national unity and a Canadian identity.

The creation of Canada’s national cultural institutions in the late 19th century and early 20th century stems from the federal government’s recognition of its responsibility for preserving the young country’s national cultural assets for the benefit of all citizens and future generations. The early federal role was therefore a builder of cultural infrastructure (e.g. radio in the 1920s and 1930s) as well as owner, custodian and arbiter of national heritage (e.g. Historic Sites and Monuments Board dates from 1919). This long period of limited but direct federal intervention in culture gave rise to many institutions still active today such as the National Gallery of Canada (established in 1880 and incorporated in 1913), the National Archives of Canada (1872) and the National Film Board (1939). The Canadian Broadcasting Corporation / Radio-Canada was established in 1936 pursuant to the Report of the Royal Commission on Radio Broadcasting (1929), better known as the Aird Commission.  Aird characterised the fledgling new service of broadcasting as “an instrument of education … entertainment and … informing the public on questions of national interest.”

As new technologies emerged and Canada’s economy diversified following the Second World War, the federal government’s role in culture broadened beyond the operations and funding of national public institutions to include the development of programme-based cultural support institutions. This second period of federal intervention was initiated by the release in 1951 of the Report of the Royal Commission on National Development in the Arts, Letters and Sciences, co-chaired by Vincent Massey and Georges-Henri Lévesque. In setting out a blueprint for a more active federal scope of intervention in the cultural sector, particularly in regard to the arts and heritage, the Massey-Levesque Commission, like the Aird Commission before it, argued that the capacity for “successful resistance to the absorption of Canada into the general cultural pattern of the United States” is one of the principal objectives of the Canadian broadcasting system. It was soon to become a more generally applied principle throughout the cultural sector during this period which started with the creation of still more national cultural institutions, including the National Library of Canada (1953), the Canada Council (1957), the Canadian Film Development Corporation (1968), the National Museums (1968) and most significantly, the Department of Communications (1969) and the Canadian Radio and Television Commission (1969). The latter established the policy and regulatory basis for the further development of the broadcasting system in Canada in the era of television. This period of institutional growth was highlighted by the country’s first centennial celebrations in 1967 that sparked a renewed interest in Canadian culture among its citizens and a great expansion of cultural infrastructure particularly at the community level through the funding of arts and heritage activities and organisations.

The last three decades of the 20th century witnessed rapid growth of culture in Canada attributable, in no small part, to the creation of a wide range of national and provincial / territorial policies and support programmes designed to contribute to the further development of arts, heritage and broadcasting and to begin to provide support to the cultural industries (including film / video, sound recording, periodical and book publishing, new media) and the enactment of legislative amendments governing such cultural legislation as the Broadcasting Act (1991) and the Copyright Act (1985 and 1997). In 1980, the Department of Communications absorbed the arts and culture programmes then housed in the Department of the Secretary of State. This period also marked the growth in Canada’s international cultural role exemplified by accession to UN conventions and international showcasing of Canadian talent through such global events as Expo 67 hosted in Montreal in 1967.

The current period marks a further broadening of federal cultural policy in Canada and features the consolidation of heretofore separate functions within the Department of Canadian Heritage (created in 1993, with the enactment of the Department of Canadian Heritage Act, and given royal assent in 1995) including culture, citizenship and identity, Sport Canada and until recently, Parks Canada. Federal cultural policies continue to reflect the two official languages of Canada, the changing multicultural nature of the Canadian population and the rights and needs of the diverse and growing Aboriginal population.

Governments in Canada at the federal, provincial / territorial and municipal levels have long intervened in culture. Cultural policies in Canada are based on a variety of factors including perceptions of the public good, the national and regional interests, economic growth, social benefits, Canada’s two official languages and multicultural society, foreign trade and investment opportunities.

Although there is shared jurisdiction for culture among the levels of government in Canada – federal, provincial (including municipal), and territorial and aboriginal (where negotiated) – the federal government of Canada alone is responsible for national cultural policies that affect the entire country. While federal jurisdiction in culture is not enshrined specifically in the Constitution, court cases borrowing from the inter-provincial and international aspects of telecommunications have supported the notion of a pan-Canadian role and national cultural responsibilities for the federal government. These federal policies do not detract from the concurrent elaboration and implementation of provincial, territorial and, by extension, municipal cultural policies and programmes within their respective boundaries. Canada’s system of cultural governance permits a form of de facto and concurrent involvement in culture and citizenship among its respective levels of government.

There are ten provinces in Canada and three territories as well as many cities and towns which, constitutionally speaking, fall under the aegis of the provincial and territorial governments. While some of the larger provinces, especially Quebec, implement support programmes in most areas of cultural development, provincial and territorial spending in culture is consistently highest for museums. The primordial role of language in society and the recognition of French as the sole official language of the Quebec government are important reasons for the strong and active level of support provided across the cultural sector by successive Quebec governments. The government of Quebec has also pursued active involvement and cooperation with la Francophonie and UNESCO. Quebec’s extensive involvement in culture is also evident in itssupport of international touring of performing arts – the only province with a sustained strategy for supporting international touring abroad although some other provinces support it from time to time. Municipal spending is most extensive in libraries but also significant in other areas such as promoting the shooting of feature films and television programmes and the support of performing and visual arts organisations and festivals in large urban centres, such as Montreal, Toronto and Vancouver, and other locations throughout Canada.

Canada’s federal cultural policy model does not consist of one single overarching statement of cultural policy, but rather includes a broad collection of policy statements, infrastructures, legislation, programmes, services and other tools in specific cultural domains. The national cultural policy model adopted by successive federal governments in Canada has been one of “cultural affirmation” through sustained intervention, arm’s length relations within the public sector, inter-governmental co-operation and consultations and mixed public-private sector partnerships. Some decentralisation of federal cultural policies and programmes is effected through regional and local offices. Cultural creativity and expression are supported by national subsidies to artists, community organisations and festivals. The economic viability of the cultural industries is enhanced through federal support programmes, tax benefits and domestic regulation. The preservation of, access to and engagement in heritage are ensured by such institutions as museums, archives and libraries that are largely public sector responsibilities at each level of government.

A great deal of creative thinking went into the establishment of the Department of Communications (DOC) in 1969. Apart from its direct responsibilities in broadcasting policy and spectrum allocation, the DOC was instrumental in tracking the emerging social and economic issues and growing technological capacity of the national telecommunications and broadcasting systems in Canada. In 1969, the Telecommission Advisory Group conducted broad studies of these related matters and was thus the precursor of convergence before its time. In 1970, DOC played a leading role in the proactive federal Task Force on Privacy. During the 1980s, cultural industry, arts and heritage responsibilities were transferred from the Secretary of State to DOC, thereby making cultural policy more comprehensive in scope.

The decision to set up a single federal department in 1993 with both cultural and citizenship / identity responsibilities marked an innovative departure in cultural policy in Canada by affirming the complex social, economic and political impact of culture and the federal government’s commitment to intervene in support of an overall framework of cultural affirmation. To date, Canada’s cultural policies and regulations have demonstrated a flexible vision and capacity to build and protect cultural sovereignty faced with the ever present influence of the United States while simultaneously striving to promote openness in global interactions and ensuring that the unique cultural diversity of Canada is reflected in its domestic cultural infrastructure, content and labour force.

While there is no single statement of Canadian cultural policy objectives, the federal government supports two strategic outcomes whereby: “Canadians express and share their diverse cultural experiences with each other and with the world and Canadians live in an inclusive society built on inter-cultural understanding and citizen participation.” The mission or raison d’être of the Department of Canadian Heritage and the Federal Cultural Portfolio of organisations is to contribute to a cohesive and creative Canada in which all Canadians have opportunities to participate in the nation’s cultural and civic life. These strategic outcomes are the desired results of the policies, programmes and services provided to Canadians and are intricately linked to the government of Canada outcomes related to strengthening Canada’s social foundations. These are, respectively: (1) a vibrant Canadian cultural and heritage and (2) an inclusive society that promotes linguistic duality and diversity. (2006-2007 Departmental Performance Report).

Principles, values and traditions flowing from these strategic outcomes and objectives include freedom of choice, a domestic market open to the world, diversity of content and content providers, the reservation of cultural shelf-space for Canadian content, access to new technologies by increasingly diverse artists, producers, distributors and consumers, public / private sector partnerships and more universal and extensive civic and cultural engagement including community building, the promotion of cross-cultural understanding and dialogue, exchanges and volunteerism. In recent years, coupled with the continuing saga of technological innovation, the principle of diversity has transformed the elaboration and implementation of cultural policies. Today, the principle of dialogue is increasingly important in regard to cultural governance and multiculturalism in both domestic and global settings. These strategic outcomes and principles have generally attracted broad public support in Canada as part of a shared commitment amongst governments and citizens to maintain an active presence in charting the country’s present and future cultural affairs.