Albania is one of the oldest countries on the Balkan Peninsula and is at the cross roads of Europe, the Balkans, the Mediterranean and Illyria. 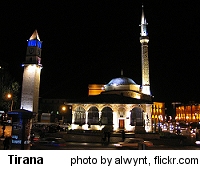 Over the past fifty years, it has been under communist rule which isolated the country from the rest of Europe until the early 1990s when the regime collapsed and independence was achieved. Prior to 1944, there was a rapid development or National Renaissance of Albanian art and culture. Following the Second World War, art and culture were under a “socialist realism” ideology whose main aim was to create the “New Socialist Man”. Large-scale performances, sponsored by the state, glorified their ideology and the new man of the Labour Party.

During the communist regime, Albanian cultural life was completely centralised and controlled by the state. Cultural events were mostly organised in the capital Tirana, which was also home to the Opera and Ballet Theatre, Popular Theatre, the Hall of State Variety Show, the Concert Hall of the Palace of Culture, the Hall of the High Institute of Arts.

In spite of the guiding political ideology and severe lack of funding, artistic and social progress was made and cultural infrastructure built up. For example, in 1946, the first Albanian Art School was founded and artists created their first professional organisation – Albanian Writers’ and Artists’ League – in 1952. A few years later, in 1954, the first National Art Gallery was opened which was an important institution to promote and protect the artistic heritage of both native and foreign artists. Despite limits placed on artistic freedom and freedom of movement, many young artists completed their studies and produced a variety of monuments and other monumental works of paintings, sculptures, design, photographs or applied arts.

The collapse of communism in Eastern European countries throughout the early 1990s gave rise to the free movement of citizens, and thus enabled Albanian artists to have direct contact with the world of art outside Albania. Since then, Albanian culture was “exported”. A new generation of artists had their works performed and distributed in different regions of the world. Works by Albanian composers were broadcast by foreign channels which gave them access to a mass international audience for the first time. Independent artists groups, orchestras, chamber music ensembles, pop music and folklore groups were founded and were given an opportunity to perform both inside and outside the country.

Such progress, however, has been more or less limited to favourable market conditions found in Tirana with little influence on other Albanians towns. The number of musical events varies in different parts of the country according to the interests of the audience and their traditions. Although there are many cultural groups and associations throughout Albania, only eight of them are recorded in the 1998 catalogue of the Albanian Foundation of Civil Society.

According to the Draft Strategy on Culture, approved by the Ministry of Tourism, Culture, Youth and Sports (MTCYS), the national cultural policy in Albania is built on European standards and models. The underlying goal of such a cultural policy is to “bring down the walls that isolated Albania from the rest of the world, especially the West”. Culture and the arts, in this sense, are considered to be tools that will help to bring democratic development to the country and re-assert its cultural identity within the region and as an integral part of European cultural identity. According to the same document, the implementation of the Strategy will increase the autonomy, competition and multi-dimensional role of arts and culture institutions in the country’s civil, democratic and economic life.

However, Albania’s cultural life remains highly concentrated within the capital Tirana, with almost every national organisation being based there and their trend is to avoid outreach projects and distribution, which results in poor cultural offering outside of the capital. For twenty years now, unique institutions like the National Opera and Ballet Theatre and the National Theatre (of Drama), notwithstanding their annual subsidies from MTCYS, operate like local institutions, giving performances only in Tirana. The situation is similar with independent theatre and music projects, festivals, shows and exhibitions. Exceptions occur in certain areas that have a tourism interest.

On the other hand, the process of decentralisation of decision-making and institutional autonomy has slowed down and in some cases has even gone backwards. On 18 November 2010, the parliament passed a new Law on Arts and Culture that will replace the Law on Performing Arts of 2006. The implementation of this Law will increase centralisation and will decrease competence in project selection as the new representatives of the Ministry of Finance will take the seats that now belong to artists in all boards of the national institutions.

Decentralisation is being regarded as a top priority of Albania’s transition towards a market economy. First political steps towards democratically elected municipal officials have been accomplished. Although their budgets are limited, they have a large degree of autonomy. Local cultural commissions have been set up and are attached to local assemblies.

Decentralisation of culture, as a part of the overall process in the public administration system, has not yet proved productive. City mayors seem more concerned with their authority over local cultural institutions rather than their performance. With the excuse of funding cuts in the central government and subsidies for the local administration, city councils have decreased their support for local arts and culture institutions, in some cases reducing aid to merely wages and salaries and operating costs.

2010 was a year of major friction between local and central government regarding subsidy distribution and taxation, with the government pushing for less local taxes and the local authorities complaining of interference from the government in their rights. Arts and culture were caught in the middle of this clash and suffered both a lack of funding and a lack of co-ordination between the MTCYS and city councils.

The cultural policy of the Ministry of Tourism Culture, Youth and Sports is to be seen in the framework of the efforts of the Albanian government towards the European integration of Albania. This is based on the principle that the cultural policy itself must become a key element of the general strategy of the development of Albania within the Balkans Stability Pact.

The recommendations of the Council of Europe are seen as a priority, especially in the book sector.

The cultural policy objectives set out by the Albanian governments are efforts to address the promotion of identity and diversity, support of creativity and participation in cultural life. Through a series of policy and financial instruments the Ministry of Tourism, Culture, Youth & Sport aimed to interlink its own objectives by developing even innovative fiscal mechanisms to support culture and cultural heritage based on global best practices. Policy intervention initiatives are considered crucial to ensuring that the interdependent relationship between tourism, culture, youth activities and sport is developed and managed in a sustainable manner at the both national and local levels. Of the 37 conventions, protocols and agreements of a standard-setting nature issued by UNESCO, only 17 of these instruments have been ratified or accepted by the Albanian government. In this way the ratification and implementation of applicable international conventions for the protection of culture and cultural heritage is one of the most visible interventions that can be made.